Although one of the most successful films of the era, The Juggernaut—described by William K. Everson as second in significance only to The Birth of a Nation on its premiere in 1915—is all but forgotten today. In the century since "The Colossus of Modern Railway Dramas" was released, more than half of the film has been lost. In this reconstruction—new for 2017—all known footage from the best surviving sources has been combined with little- and never-before-seen production and publicity stills to bridge the missing material and present The Juggernaut as it was seen at its New York premiere in 1915.

Also available on Blu-Ray and DVD. 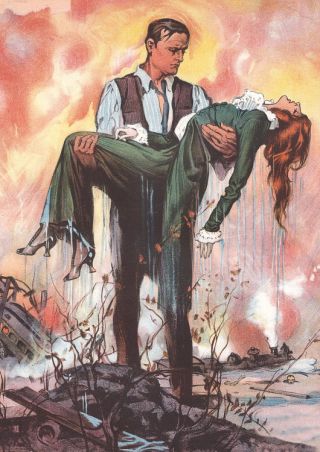 The president of a notorious railroad fights dirty against a lawsuit while, aboard one of his trains, his daughter unwittingly speeds toward her doom.

An alternate cut of Vitagraph's thrilling railroad drama The Juggernaut.

The Firing of the Patchwork Quilt (Vitagraph, 1911)

When the trestle her son's train is about to cross is struck by lightning, a mother must find some way to warn him of the danger ahead.

Two Pennsylvania Railroad locomotives meet in a head-on collision in this 1904 short.

A short 1896 actuality depicting the Black Diamond Express as it approaches and speeds passed the camera.

A short 1897 actuality depicting a Southern Pacific Railroad train with a mail car exiting a tunnel.

A short actuality from 1901 showing the passage of the Empire State Express train.